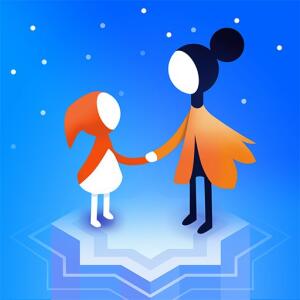 I recently recommended Monument Valley 2 to my family as something fun to do. After walking one of them through the installation process, I assumed that would be the end of it. Maybe I’d hear back from them in a couple of days about whether they enjoyed it or not. But a couple of days later I was on the phone with my mother and she was complaining that she did not understand how to progress in the game after solving the first puzzle. This surprised me, as I had experienced no troubles with that aspect of the game. I talked with her about it for a bit and realized something: I had so much intuition from years of playing games that she simply didn’t have. That got me thinking: what else do I take for granted about games?

My mother is an intelligent woman who has some amount of experience playing games. She likes hidden object games, does a lot of crosswords, and plays the occasional puzzle game on her smartphone. But Monument Valley 2 was different. It’s a more traditional videogame made (I assume) for an audience of people who play a lot of videogames. If so, I’m certainly not going to blame the developers, ustwo games, for choosing an audience and sticking with it. Rather, this is intended as an examination of my own biases and assumptions.

To look at my mother’s issue, I’m going to use Monument Valley 2 as a sort of jumping-off point. I replayed the first level to see where the sticking point could be. I put my phone down to check on something and when I came back I saw a little message telling me how to move my character by tapping the screen. So far so good. She probably hadn’t seen that message as she did manage to figure the level’s puzzle. So I did the puzzle and moved my character up to the platform on top of the screen and watched the game’s logo slowly appear over the beautiful landscape. Then I did what she told me she did: I waited for something else to happen. Indeed, nothing did. I enjoyed the vista and the pleasant music, but I hadn’t officially beaten the level yet, as it hadn’t brought me back to the level select screen. The only thing that indicated any kind of interactivity was the small pulsating icon under the massive logo. Now, I would look at that and say that would be enough. But it wasn’t enough for my mother. I assume she just saw the icon and thought it was part of the game, and I don’t blame her. It does definitely fit the game’s minimalist aesthetic.

I don’t remember the first time I played a console game. I was very young at the time playing on either a PlayStation 2 or an Xbox at a friend’s house. But the point is I’ve been playing games for a very long time. So I know how a controller works. I know the button layouts of the major companies’ current controllers and a decent amount of the older ones as well. I have a lot of muscle memory and instincts built up from literal decades of gaming. I can do quick time events just fine without looking down at the controller, and I can pick up and understand how to play a game with some amount of certainty, especially now that a lot of control schemes have been standardized within their genres. So I can’t imagine how it must be to be someone of my age, or especially my mother’s age, to pick up a controller for the first time. I assumed that a mobile game with touch screen controls would be easy enough for a relative newcomer, as she had used it for other simple games in the past. But the mistake I made was assuming my experience would be the same as someone with a vastly different gaming background.

This is all part of a larger discussion on accessibility. Games don’t have to be for everyone, but they should be for anyone. That means making sure that anybody, from enfranchised gamers, to newcomers, to disabled people, should be able to enjoy any game they choose. This is not easy to do, though thankfully it’s becoming more common in the industry. Sites like Can I Play That and Ability Powered, and folks like Specious Coda-Bishop, Ian Hamilton, and Steven Spohn (and many more) are advocating for more accessibility features in games, which is very encouraging to see. Fact of the matter is, media needs to be more accessible. Games especially, being interactive, need to be made more available to more people, regardless of their background or ability level.

So where does that leave Monument Valley 2? I thought it was a fairly accessible game, and I still think it is. Though off the top of my head, some better tutorializing and signposting, as well as a colorblind mode might be some nice improvements. I’m far from an expert of course, and I highly recommend checking out those people I mentioned earlier. I’m still learning, but they’re excellent sources of information and passion on the subject. I was forced to reevaluate my own privilege and assumptions with Monument Valley 2, and I like to think I came out of it a little wiser and more well-informed. I really encourage you, the reader, to think about this issue yourself. What do you take for granted about the way you play games? Do other people you know have the same access or ability you do? And most importantly: if not, how can you help them?