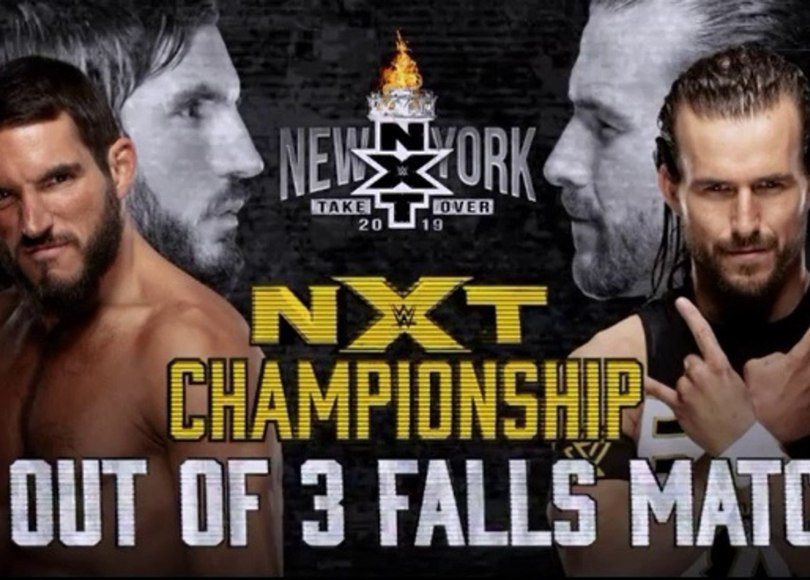 If you’ve followed me on Twitter for any significant amount of time, you’ll know that I love professional wrestling. I follow mainly WWE’s NXT and 205 Live shows, I’ve watched a whole bunch of PROGRESS, some New Japan Pro Wrestling, and I currently keep up with a number of Australian independent promotions like Melbourne City Wrestling and Explosive Pro Wrestling.

I wanted to give this quick introduction to briefly explain where I’m coming from when I talk about wrestling. I follow large and small companies, and I like many different styles of wrestling, be they grappling, cruiserweight wrestling, lucha libre, or brawling. Basically the only thing I don’t really like is hardcore wrestling, especially with sharp things. But what I love most about wrestling is the stories, which will be most of my focus in this article. Don’t get me wrong, I love a good spotfest as much as the next person, but I keep up with promotions because I’m invested in the stories and characters. This will obviously contain spoilers for the Adam Cole vs Johnny Gargano storyline and the matches. It’s all definitely worth watching even if you know who wins, but this has been your official spoiler warning.

Let’s take a look at this story overall. On the March 20th episode of NXT, it was revealed that NXT Champion Tommaso Ciampa had an unfortunately legitimate neck injury and was forced to relinquish the NXT Championship. He was supposed to defend his championship against Johnny Gargano at NXT Takeover New York on April 5th, but that match would have to be cancelled because of the injury. With Takeover approaching quickly, a Fatal Five-way was made to determine Gargano’s new opponent for the two-out-of-three falls match. Aleister Black, Adam Cole, Matt Riddle, Ricochet, and Velveteen Dream all fought for the main event spot of Takeover New York, with Adam Cole coming from behind at the last moment with a Last Shot running knee strike to Ricochet to win the match. The video package for this match was top-notch and totally worth watching.

The match at Takeover was excellent. Cole and Gargano told a hell of a story in that ring, full of chain wrestling, hard strikes, and false finishes. Cole played the cocky bad guy and Gargano played the underdog good guy to a T. Cole managed to secure the first fall with an aggressive salvo of moves ultimately ending in a Last Shot. Gargano came back in the second fall with a tapout victory using his Garga-No-Escape submission move. The last fall was perhaps the most exciting of all. A flurry of moves, some interference from Cole’s stablemates from The Undisputed Era, and a series of progressively more impressive kickouts by Johnny Gargano culminated in another Garga-No-Escape locked in on Adam Cole with another tapout win for Gargano to claim the NXT Championship.

Parts of this match were even used to further the storyline. While Gargano was celebrating his ascension to the mountaintop of NXT, Cole brought up a good and valid point. He won the first fall, fair and square. If it had been a normal wrestling match, Cole would have become the champion. His argument was that he deserves another shot at the championship because of this. I really liked this angle they were taking with Cole’s character. He may be the bad guy, but he had a legitimate point. What indicates him as a bad guy is his delivery and general attitude of being the cocky jerk he’s so good at being. General Manager William Regal agreed, and made the match for NXT Takeover XXV: Johnny Gargano would defend his NXT Championship against Adam Cole in a normal one-on-one match.

This match was even better than their Takeover New York match, in my opinion. It might be my favorite match of the year. No gimmicks, no outside interference, just two guys at the absolute top of their game going at it. They couldn’t help booking just a little bit of bollocks, though, as there was a referee bump and the use of an illegal weapon while the referee was down. But I didn’t mind it too much. Johnny Gargano has been shown to have a bit of a vicious side in his feud with Tommaso Ciampa, so him taking advantage of the referee being temporarily unavailable was actually pretty in-character for him. What was perhaps most interesting about this match is that the bad guy was right all along. In a straight wrestling match, Adam Cole had Johnny Gargano’s number and ended up winning the match with a signature Panama Sunrise Canadian Destroyer into his finisher the Last Shot, to become NXT Champion and ending Gargano’s reign at 56 days with zero successful defenses (on TV).

In the weeks after Takeover, Cole would travel across America on his celebration tour, even stopping by Gargano’s father’s restaurant to taunt him, and a Cleveland-based (Gargano’s hometown) wrestling school to gloat that he made it and the students there never would. He even issued a challenge on NXT to one of the students from that school in order to show off. But that student didn’t come alone, as Johnny Gargano came out and attacked Adam Cole. William Regal wanted to settle it once and for all. So at NXT Takeover Toronto II, there would be another 2-out-of-3 falls match, with both Gargano and Cole choosing a stipulation for one of the falls each. Cole picked a normal wrestling match, as that’s how he beat Gargano before. Gargano picked a Street Fight, because his vicious streak is starting to show up now that he’s chasing the title again, and William Regal would choose the third fall if it came to it.

This is another classic, well-trodden WWE story that NXT is so good at telling and retelling while still making it interesting. Heck, it’s almost a trope of WWE storytelling at this point, where two wrestlers will have two matches, each win one, and the blow-off match will have some kind of gimmick. This gimmick usually ends up being a hardcore match of some kind. Street Fight, Last Man Standing, Ladder Match, that kind of thing. What’s interesting about this situation is that a stipulation match usually favors the bad guy so they can get away with underhanded tactics or straight up cheating without being disqualified. But it was Gargano who chose the street fight. This is his vicious dark side that was unleashed during his Ciampa feud showing up. Cole, meanwhile, chose a normal wrestling match because that’s what he’s good at. He’s so self-assured that he can beat Gargano that he feels he doesn’t need gimmicks to win. You could argue that this is his arrogance coming to light, but I think it’s also partially based in fact. He made another good point here. He won their previous match. Why shouldn’t he be able to repeat that?

But this is also where the storyline started to lose me a little bit. You see, I don’t actually like hardcore matches very much. I can point to like, four hardcore matches I’ve legitimately thought were excellent. But more than anything, this felt like the NXT writers constantly trying to one-up themselves to raise the stakes as high as possible. They’d already done a two-out-of-three falls match. So now the next one needs to have weapons. Ooh, and the final fall has to have a cage! With barbed wire! And weapons attached to the sides of the cage! Sure enough, that’s exactly what happened. When the match at Takeover Toronto II rolled around, Cole won the first fall when Gargano got himself disqualified by using a chair and starting the street fight portion of the match. Gargano won the second fall with a Garga-No-Escape, and as the beginning of the third fall was announced, a steel cage with barbed wire and weapons was lowered out of a curtain above the ring. I always try to give matches an honest chance to impress me, but I can’t lie, I completely checked out at this point.

The match continued on with both competitors using chairs, tables, kendo sticks, ladders, fire extinguishers, and more, to try to incapacitate their opponents. It escalated to the point where they basically stopped caring about ring psychology and just hit each other with weapons until they couldn’t go anymore. The final spot of the match was Cole and Gargano falling off the top of the cage and onto a table, with Cole falling on top of Gargano and getting the pin. It was gross, boring, and most of all, it was too much. There was just too much violence. Thankfully there wasn’t a lot of blood or sharp things. But it was all so indulgent and excessive. So much so that I stopped enjoying it. This was my least favorite of their trilogy of matches.

So let’s talk about some things I liked in this storyline. NXT is known for telling basic storylines and telling them super well. This was two guys who didn’t like each other having matches to settle their differences and fight over a championship. Johnny Gargano played the capable but plucky underdog babyface, and Adam Cole was the arrogant heel who taunted Gargano, disrespected his family, and held his victories over Johnny over his head. It was a clear storyline without needless twists and turns that overcomplicate things.

What I didn’t like was the way it ended. It was uncomfortable to watch and so excessively violent that it stopped being entertaining. I watch wrestling because I want to see skilled athletes tell stories using their movements in the ring. When all of that ends and it descends into gross brawling with weapons, I lose a lot of the interest I have in the story of the match. That isn’t to say that you can’t tell a story through violent brawling, but that’s very hard to do and I don’t feel like they succeeded.

Adam Cole is an excellent NXT Champion. I was sad to see Johnny Gargano lose the title, but I think in the long run it’ll be good for NXT. A bad guy champion allows you to build up a bunch of new people as viable contenders and have good matches with the champion. Cole is a phenomenal wrestler capable of putting in good work with people both in the ring and on the microphone. Despite the stuff I didn’t like about this storyline, I’m still invested in where it goes. I want to see what Gargano does next. Whether he goes to Raw, Smackdown, or (hopefully) 205 Live, I’m sure he’ll do great. He’s one of the best wrestlers in the company right now, and if they know what they’re doing, they won’t waste him.